Welcome to the Cibrèo and to Florence

WE INFORM OUR KIND CUSTOMERS THAT

FROM SEPTEMBER 1st THE RESTAURANT, THE TRATTORIA AND THE CAFÈ

WILL BE OPEN SEVEN DAYS A WEEK

You can end up into the world of the Cibrèo through different paths.
The same happens if you walk along via de’ Maggi and via Andrea del Verrocchio or stroll around near the food market in Sant’Ambrogio. This neighbourhood is a crossroad of routes, lives and stories that tell of the city, of its beauty and its love for all things special and well-made, while underlining the care and protection they require.

Cibrèo was founded on the 8th September 1979 following an intuition by Fabio Picchi, who chose this name in full harmony with its family tradition and with a real passion for the alchemy of the Florentine cuisine.

In a constant shift between past and present, the city, the neighbourhood and the whole world, the Cibrèo becomes the ideal setting for cultural discussion and social promotion. The bond with his wife Maria Cassi, an artist, actress and director, together with the professional coalition with his son Giulio Picchi, a young and renown painter and illustrator, first led to the creation of the restaurant, Cibrèo Ristorante, and the eatery, Cibrèo Trattoria (the so-called Cibrèino), which were soon to be followed by Caffè Cibrèo, the cultural association Teatro del Sale and, last but not least, the recent opening of the Ciblèo. 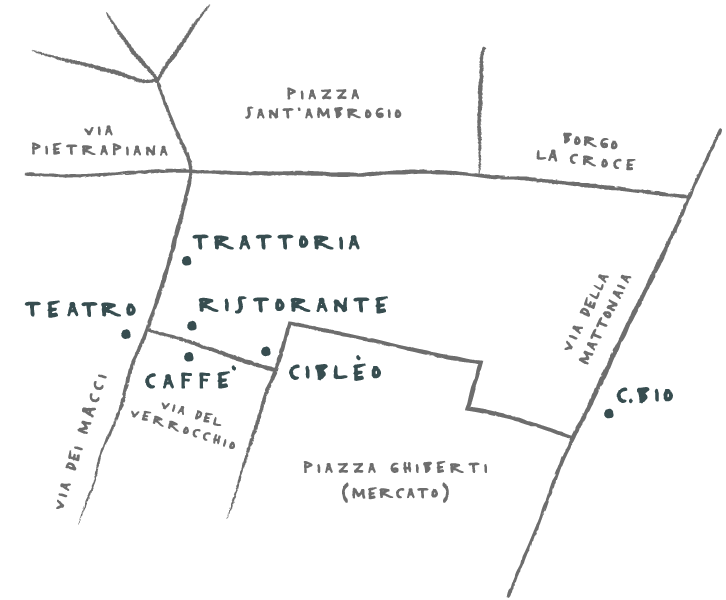